We all put on super hero shirts and climbed in the car. Everyone was excited. We were on time. Do you want to know about my Jesus? That's my Jesus. We are never ALL dressed, ALL excited, and on time ALL in the same day. We were being held close by a loving God on National Adoption Day 2014 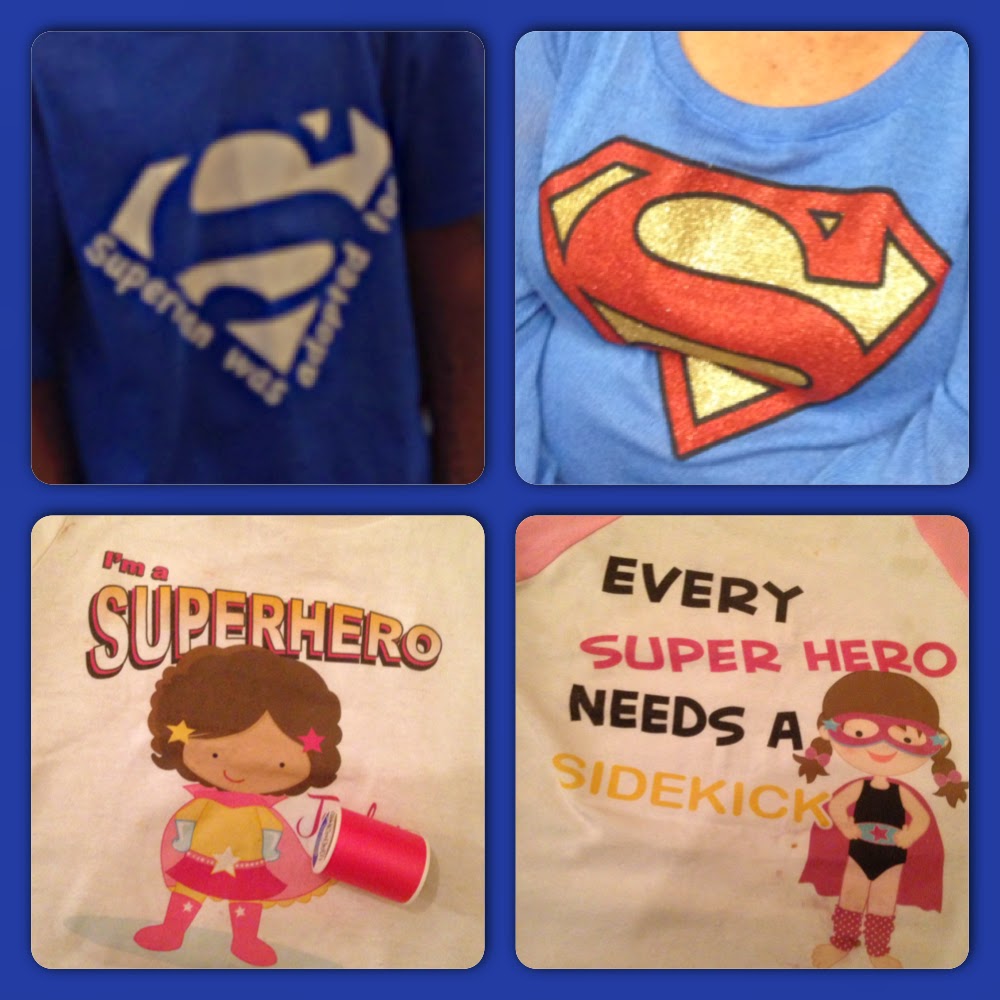 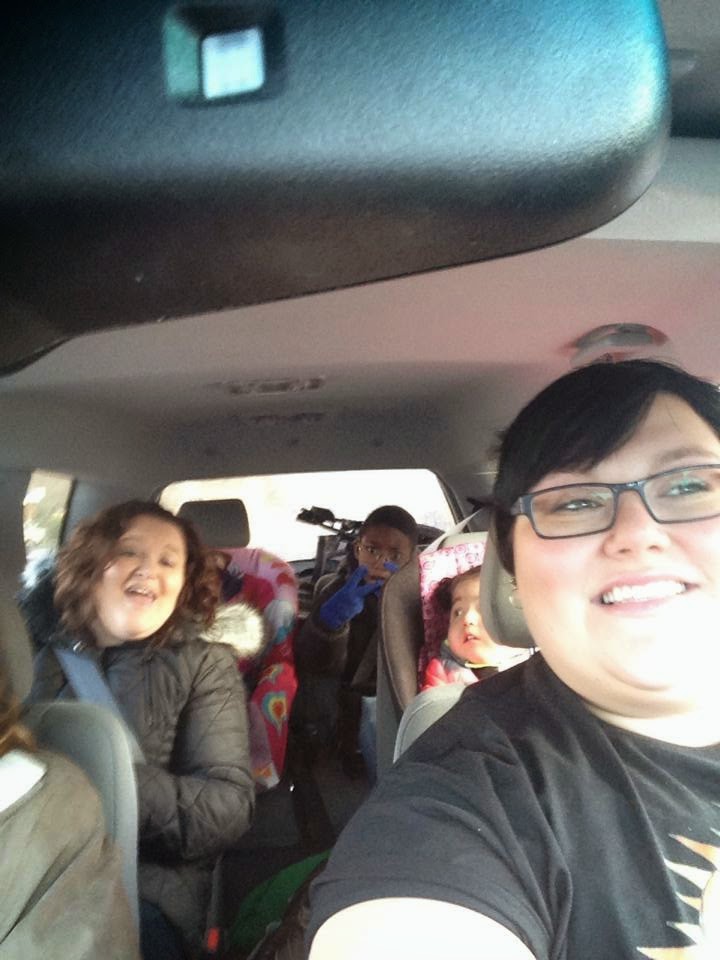 We got into the courthouse without hassle, and when the elevator door opened the Heavens opened and poured love all over my growing family. Everyone came out to be our witness: The sweet group home worker who knew him before I did. The police detective who took all the gruesome hospital pictures when they were still unsure if they were investigating an assault or a murder. The CPS investigator who labored hard over appropriate petitions and indications. The intake worker who coached me through getting him out of the hospital. The management worker who really required a lot more management from me than he ever needed from her, but she eventually got him freed. The attorney who represented his best interests- even when she honestly told me she didn't know if it would be enough to keep him safe. The foster care trainer who opened our home and taught us about making a rocking lifebook. Our attorney, who filed some papers and stroked our egos because we were weary by the time he came in on the case. The adoption worker who called the judge's secretary 98,000 times asking for a finalization date because she knew I was anxious about it. And our friends and family. The judge said we broke the record for attendance at an adoption. We had to, though. This one was special. 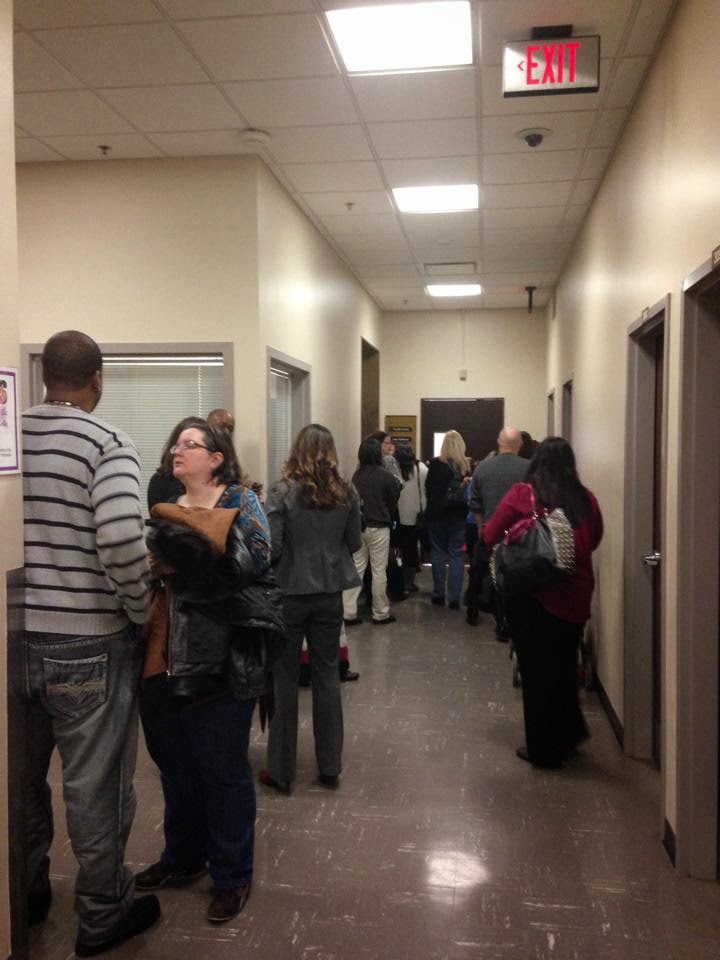 We went into the judge's chamber, and verified all our information. He told the judge that he was getting lobster after this as if to hurry her along. She made small talk throughout the 10 minute process, asking about our dogs and his sisters. He decided to share that he would not like any more babies, our cat scratched him "when I was a little kid", and Daddy almost broke my arm this morning (to which I followed up with "They were play wrestling"). It was fun and light hearted. I had been pretty nonchalant about this part. He has been ours for 3 years and 8 months. Adoption wasn't going to change anything. Let me tell you, though, when the judge asked him to sign his adoption papers it was anything but nonchalant. It changed everything. He's mine. No one can do anything about it. It's done. We have the same name. Yeah, I cried like crazy.  I made a weird joke about how we'd pay for college and he has to make sure the nursing home is nice to us when we get old. The judge made a weird joke about my green highlights being kryptonite. Old people... He was cool. He's way cooler than me. 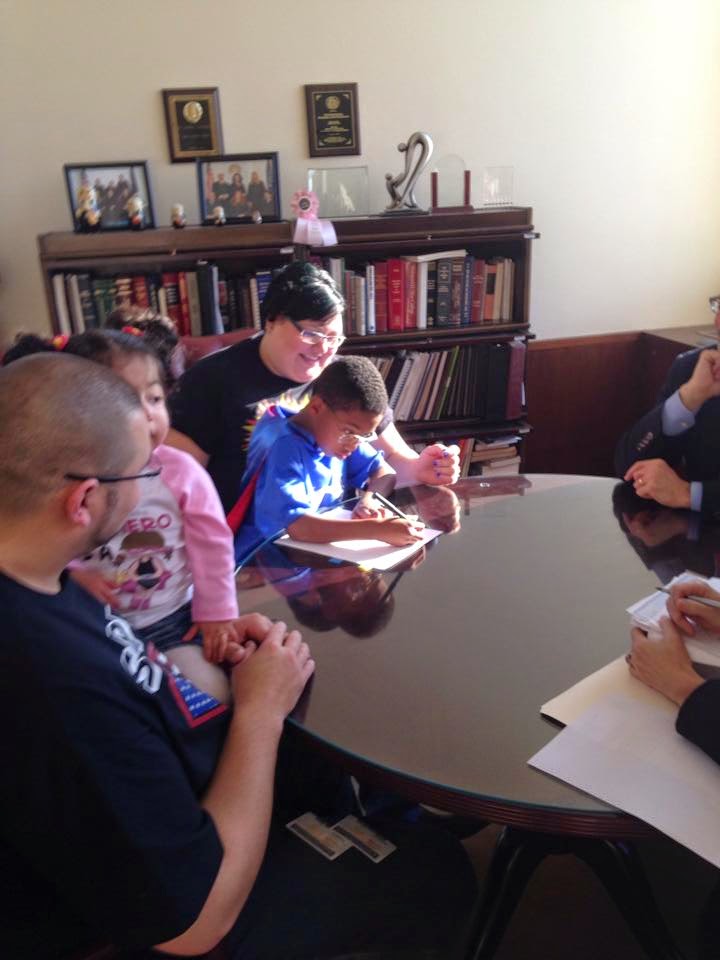 After he was adopted, we posed for millions of pictures. The news was there and we were interviewed. They celebrated the 4 adoptions that happened in the county with some lengthy speeches and cake that he didn't want. He had been planning to eat crab legs after his adoption ever since Baby Girl's adoption last year was followed up by dinner out. Once the day came, though, he changed his request to lobster. Announcing that he was leaving for lobster was the only usable sound bite for the news reporter. The celebration and everyone talking to him and about him was overwhelming. He was done by then. We begged him to pose for one last picture, promising he didn't even have to smile. 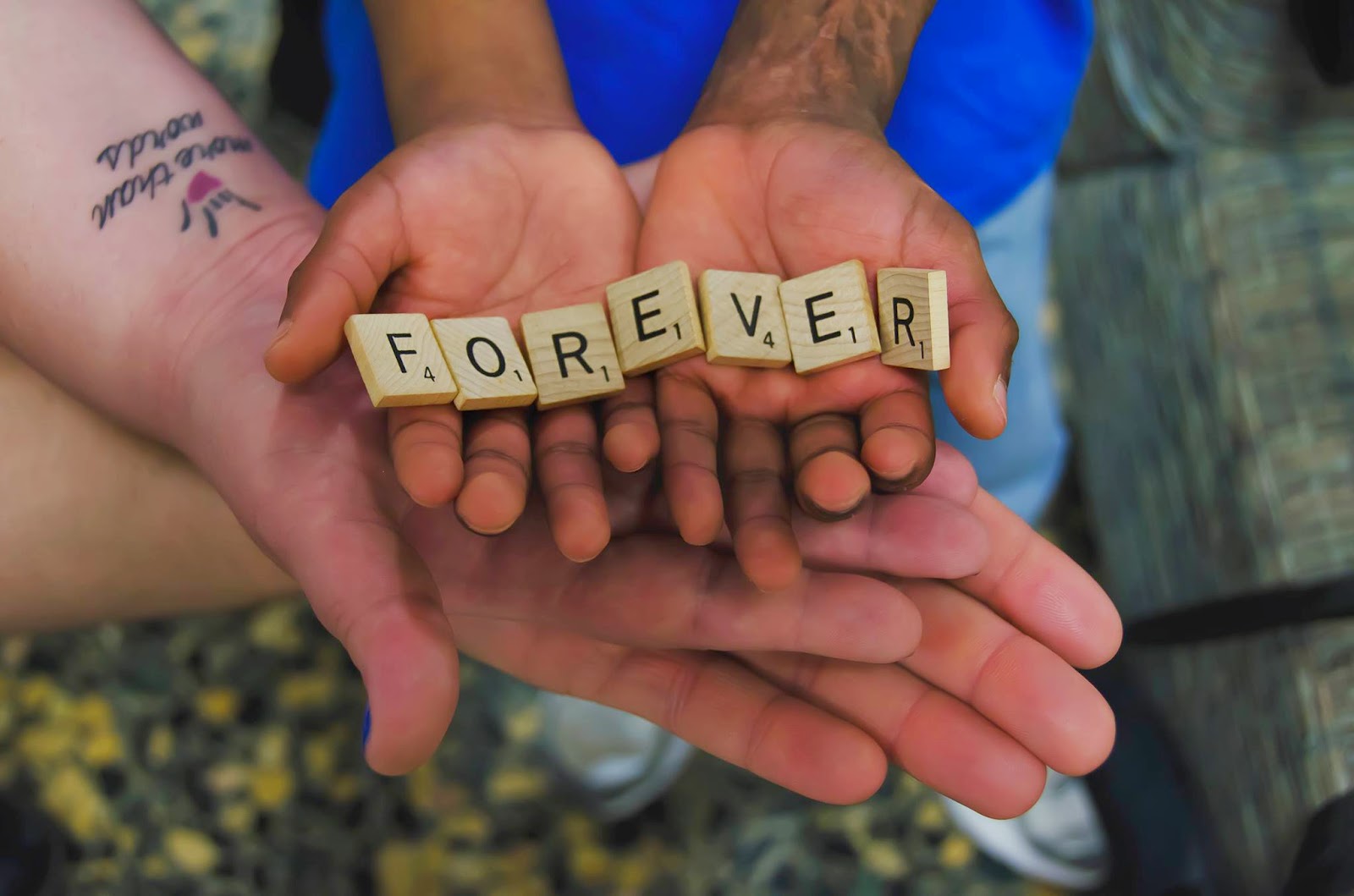 We let him play on the tablet and be off in his own world for the drive home and lunch. He was pretty content with his lobster. 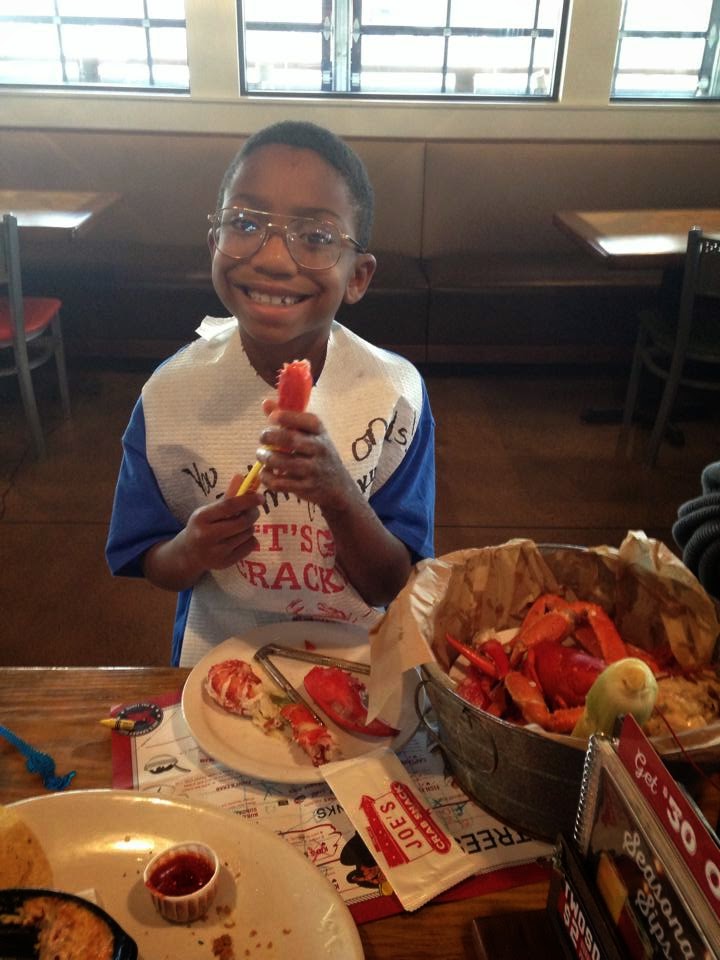 Our very first evening as a forever family, I sent him to respite for 4 hours. There is a program that we are involved in who offers planned daytime respite to their clients. They take the kids to a house that has been completely decked out with all things awesome. There's a lego room, a TV room, music room, ball pit, etc. He loves it. The slots fill up quickly every month, so we take whatever they offer us. Adoption day was a use it or lose it offer. I knew he'd have fun, so I agreed to it. I am so glad I did. He went and zoned out in front of the video games, then came back ready for bed. 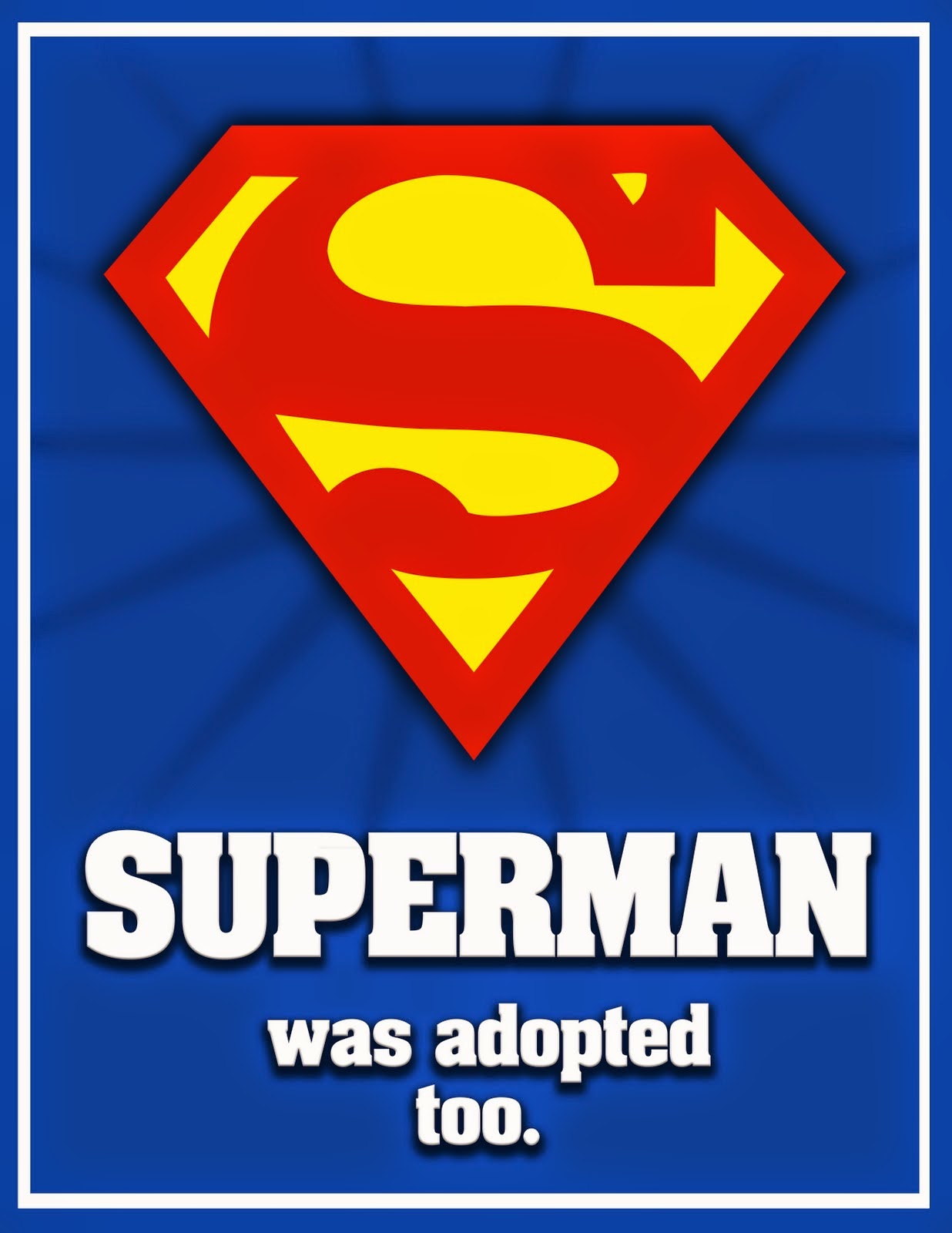 He asked for his Dad no less than four times during the day, which is not typical. I brushed the question off twice. Answered simply that I had not invited Dad once. Then looked him in eye and explained that his Dad will see him at the next visit, but adoption day would have made him sad, so I didn't invite him. He understood that in a way I wish he hadn't. It was clear that adoption day was causing some insecurity in his heart. Dad went through the photos I posted and 'liked' them all, which was kind. Relative Resource called after seeing us on the news and congratulated everyone. That took an enormous amount of perspective and strength. I'm proud of his family for putting him first and making the effort to become our family too.


It hasn't quite set in that this chapter has ended.

I was super impressed with your responses to What Makes a Family?  I thought about responding to each comment, but figured it was easiest to answer here. It would also give me an opportunity to show you my kids' Halloween costumes for no reason.


First, the post was really intended to address how we, as the "inner circle" of foster care and adoption, speak to those on the outside about our children's families. This is the trend that I'm seeing more often and find really dangerous. If a fellow fost/adopt parent said to me, "I got little Johnny all bathed and dressed cute for his visit with his Bio Mom, and she called 10 minutes after we were there to say she wasn't coming. At that point, why even call?!!", I know that frustration and I understand it just comes with the territory. I would not harshly judge the Mom or feel the need to come to the defense of the foster family. I could share her weariness and then we could move on. When you "vent" to your family or friends outside of the system, they will try to save you. It's what good friends and families do when someone causes their loved one discomfort. If you set the tone, by adding an (unnecessary to the story) title separating the biological parent from their full role, the other person will match that and start the shame/blame crap that is hurtful to your resolve to move forward in shared parenting and destructive to the child's security. Further, they will bother me because apparently it has now become appropriate to have these conversations on public websites where I can see it.

As far as what you do to clarify your situation with your child, I know with absolute certainty we all do the best we can. I have never transitioned from foster care to adoption with a toddler or preschooler, so I would never pretend to have any clue what that's like. Baby 4 understands and owns his whole story, so he does not get confused with just Mommy and Daddy for all of his parents. If I say "Daddy is taking you to the park", and there is question as to who I'm talking about I will specify "Daddy Brandon" or "Daddy John". He also only specifies when someone is confused. I totally agree with following the child's lead as they get older as to what terms they like. I have discouraged 4 from saying, "You're my BEST Mom." or "but she's my real Mom" by pointing out all the best things his Mom did that I couldn't or all the real things I do for him. I do that because I can see how that kind of thinking could make him feeling like he needs to pick a side or be loyal to one or the other parent. Even if he chooses this language or ideas throughout his life, I want him to know it doesn't have to be that way. He knows why he can't live with Mommy Susan, and does recall the trauma she caused him. I never try to sugar coat what happened to him or make his parents look like super heroes or victims. They did what they did and he needs to know. Which brings me to my next clarification...


Who you are is different from what you've done. I try so hard to drill this into Baby 4. He has some big behaviors and there have been entire weeks where every other time I open my mouth, it's to correct him or deliver a consequence. During those weeks, we all get a little antsy about how secure our family is. So about two and half years ago, I started saying "There is nothing you can do that would EVER make me stop loving you.". I say it when I'm especially mad- sometimes for him and sometimes for myself. Once we knew he was staying forever, I altered it a little, "I will always be your Mom. Nothing you do will EVER make me stop loving you.". I really mean it. There have been times where I have gone through all the terrible twists our lives could take, and I can honestly say there is nothing that would change his identity. He is my son. What kind of message do I send if I link his parents' behavior to their identity? They are his parents. Yes, they are not safe caregivers. Yes, they made poor choices. No, we don't like what they've done. We don't even have to like them at all (but it's nice if we do). Respect for their role should not involve changing the truth or ignoring the negative. Just like my loving Baby 4 does not mean the consequences don't get dished out like hotcakes on a Saturday morning.

I'm glad we had this chat. I needed to get this off my chest.
Posted by Teresa at 8:14 PM 1 comment: Links to this post